Renting DVC points is likely my #1 favorite way to save money on a Disney vacation. It has allowed us to stay at places we’ve never dreamed we’d be able to stay!

There are a few different ways to go about renting Disney Vacation Club (DVC) points which you can read about in this post on how to rent DVC points and save up to 70%.

During my years of studying DVC, I’ve discovered that there are definitely some sweet spots in the DVC point charts and villas. Certain villas offer additional bathrooms, beds, space, or just a better experience than others.

In this post, I’ll share my picks for the DVC villas that are the best deals and my experience staying in some of them! 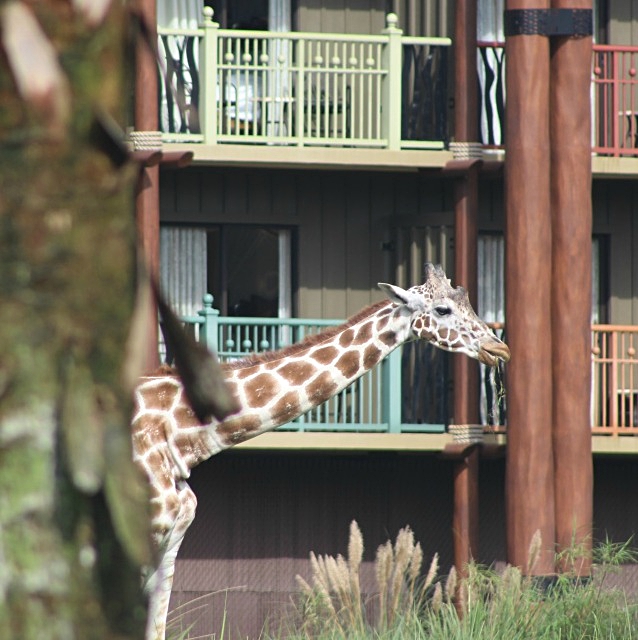 First, here are my picks for the types of villas that offer the best return on your investment:

Next, I’ll explain each category in detail and let you in on where you can find these rooms!

Ten Point and Under Studios I am someone who is ALWAYS trying to get the most bang for my buck. So, of course, I am drawn to the DVC rooms that allow me to stay on Disney World property for the least investment of points!

There are a handful of studio villas that can be had for ten points and under during certain seasons at Walt Disney World. Since these offer such a great return on points, they tend to be very popular and book quickly! But if you plan far in advance and are ready to book when your window opens, you can get a great deal.

Here are resorts that have studios for 10 points and under:

Next are some details on the low cost rooms at each of these resorts.

Animal Kingdom Lodge (AKL) has 18 “value” studios that can be had for under 10 points during Adventure, Choice, and Dream seasons (check out the dates for these seasons in 2019 here).

The number of points required for these rooms in 2019 Adventure season actually dropped to only eight points per night. 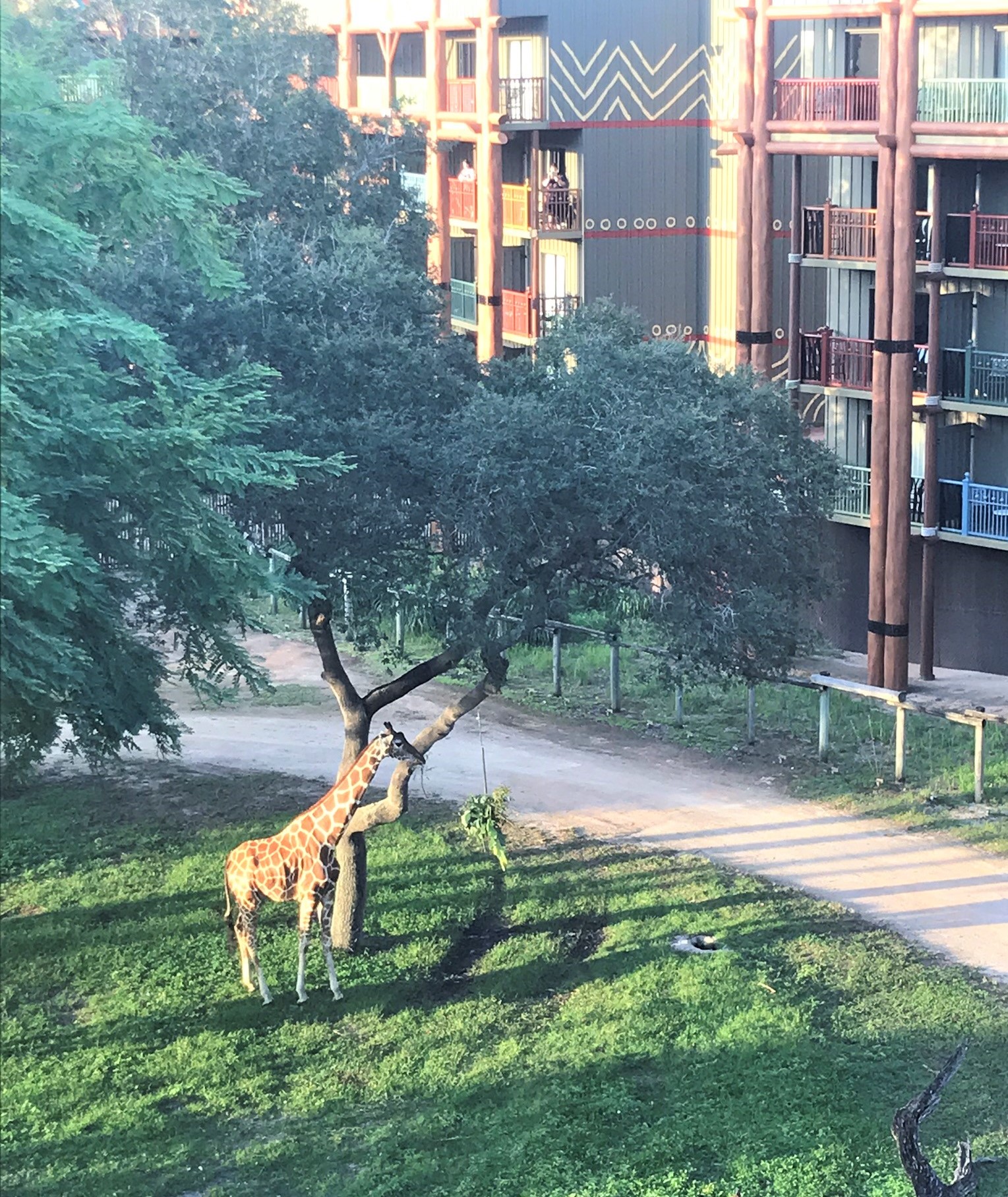 The incredible view from our Value Studio

I was able to score five nights in an AKL Value Studio last year and we loved the room. It is two feet narrower than the standard studio at AKL but we didn’t notice the difference.

As for views, eight of the values have a Savannah view, eight have a pool view, and two have a parking lot view.

Standard view studios at Animal Kingdom Lodge also start at only 11 points per night in the lowest seasons of the year (January, September, and early December). 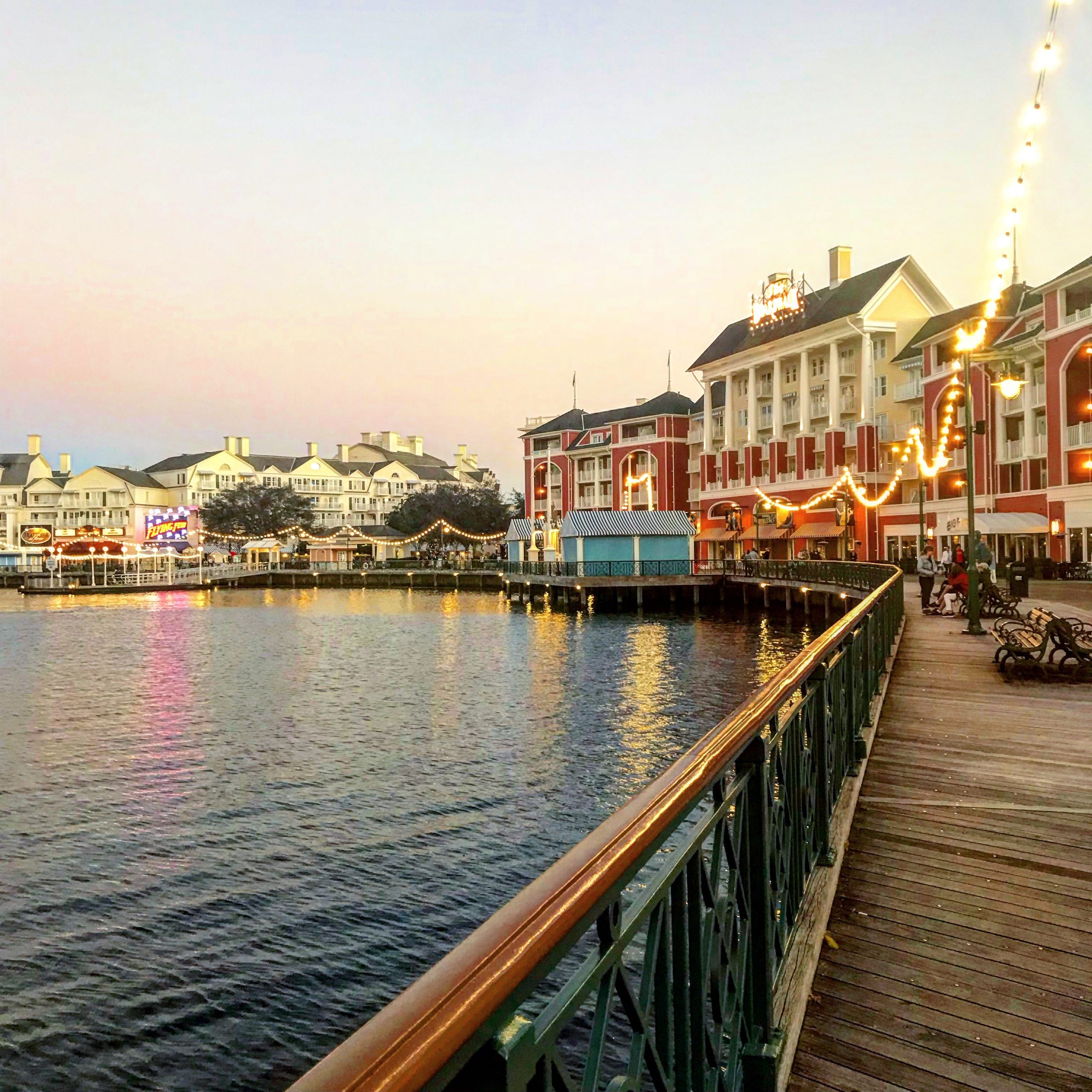 You can get a standard view studio at the Boardwalk for 10 points per night during Adventure and Choice Seasons.

The Boardwalk is especially popular during Food & Wine Festival because of its proximity to Epcot, and these seasons cover most of the festival dates. That makes these rooms VERY hard to get, so be sure to book early – ideally 11 months in advance if possible. 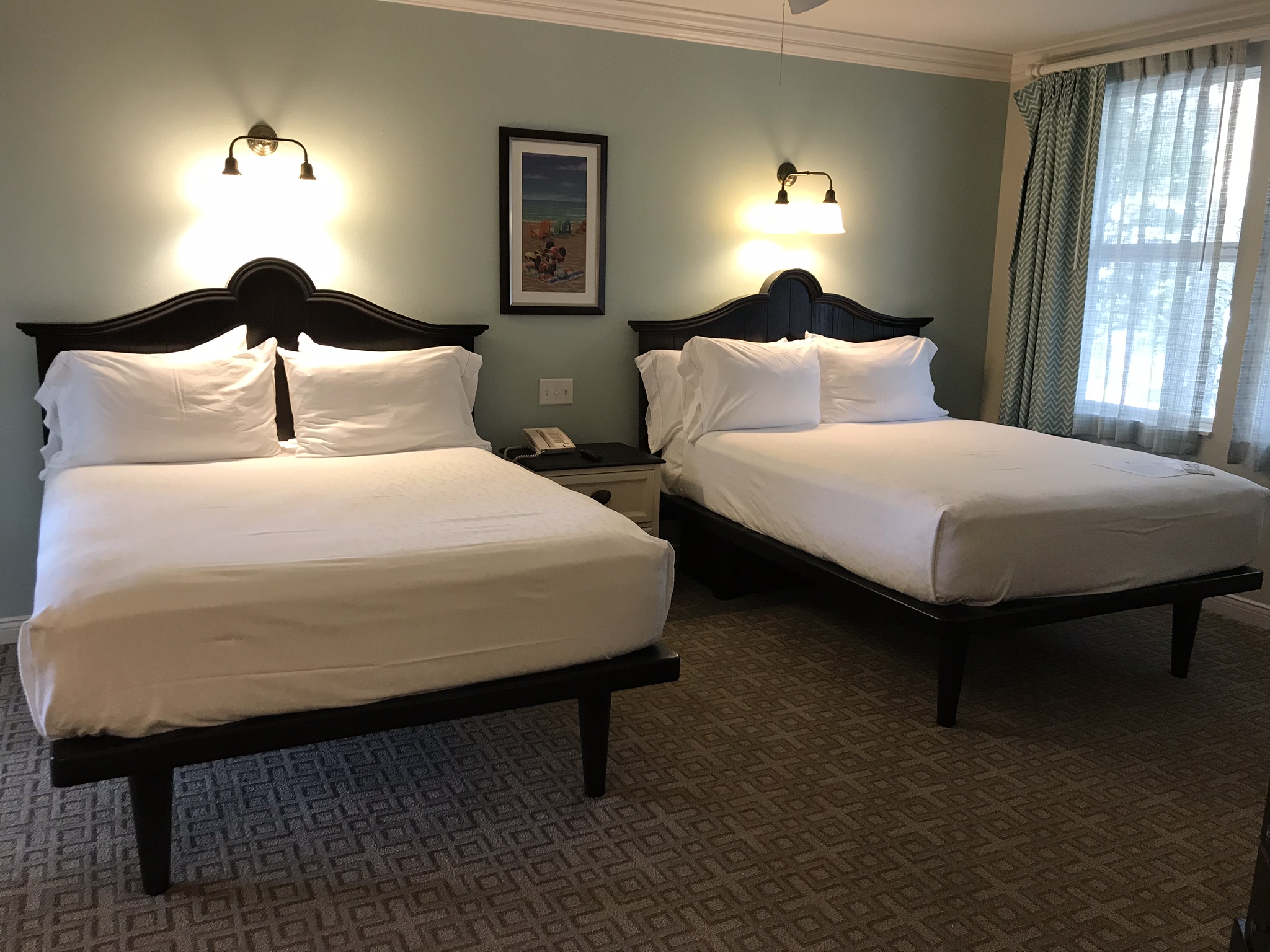 And last, studios at Old Key West can be had for 10 points during Adventure and Choice Seasons. This includes those designated as “Close to Hospitality House”. It is great to get a preferred location without having to spend extra points.

These villas also offer two queen beds as opposed to the queen/pull-out sofa layout in other studios.  I’ve stayed in one while traveling with my mother-in-law and they are perfect for two adults who don’t want to share or bed or sleep on an uncomfortable pull-out sofa.

These studios are understandably VERY popular since they offer excellent bang for your buck. If you want to check availability for these rooms and want help securing a reservation, I suggest you get in touch with David’s DVC Rental here. The addition of a fold-out single “Murphy Bed” in some studio villas is my favorite recent development with DVC rooms!

Even though we just have one child, we strongly prefer this setup because it means we don’t have to unfold (and repack) the sleeper sofa every day and can even use it when our little one is asleep.

I love the little Disney touches in these Murphy beds and the fact that they are more comfortable than the pull-out couches.

I fit on the bed (just barely) and I’m 5’10”, so an older kiddo or teenager would be comfortable on the bed unless he/she is of above-average height. Be warned that they are narrower than a regular twin bed, so an adult may feel cramped. 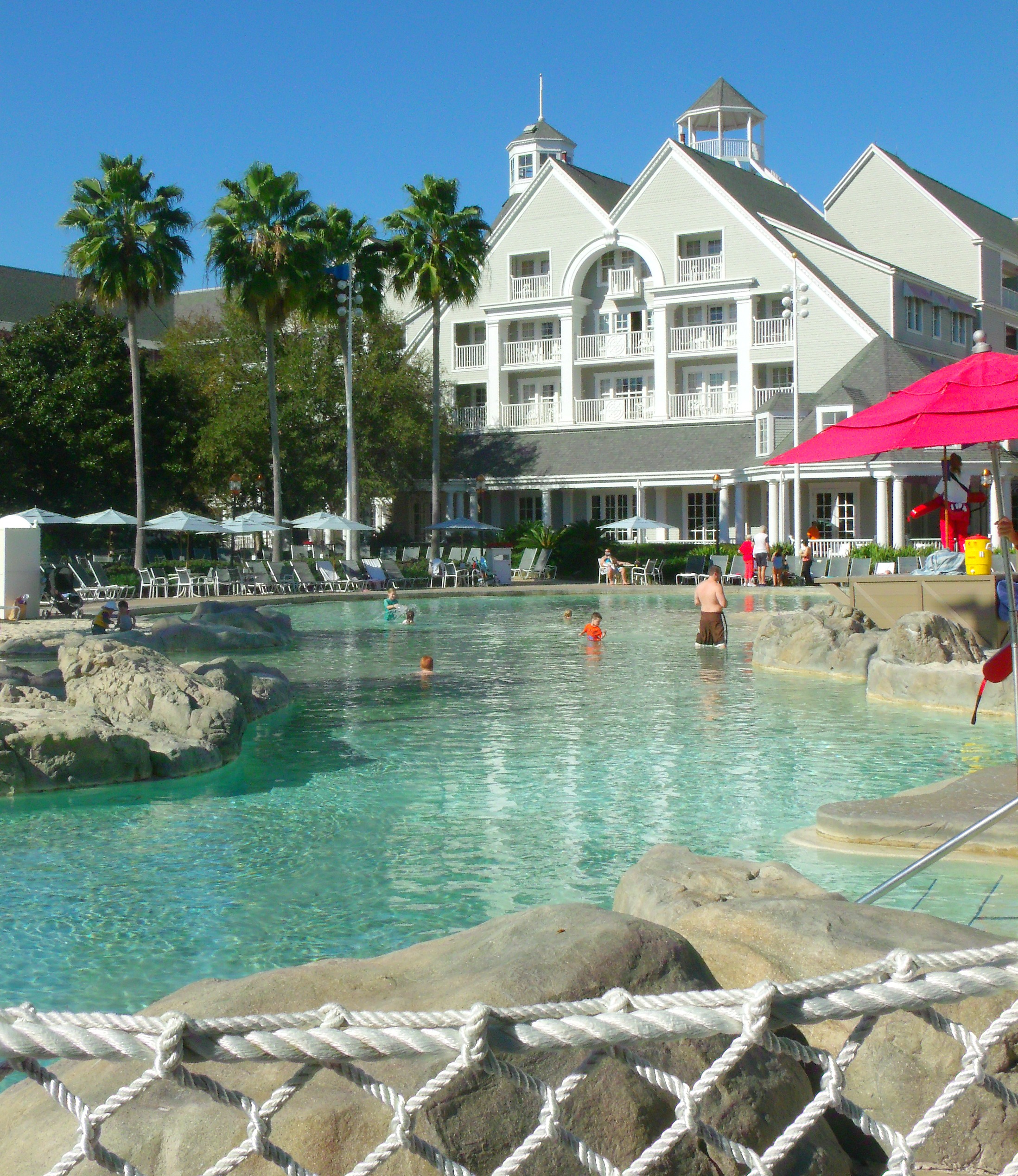 Here are the resorts that currently have studio villas that sleep five:

Some families appreciate the extra space (and privacy!) and one-bedroom villa provides. Some one-bedrooms offer a chair that folds out into a single bed. This is helpful for families with three kids and those with older kids who don’t want to share a bed.

Here are the resorts that have one-bedroom villas that sleep five:

I’ve never slept in one of the sleeper chairs, but a friend’s teenage son has and it seemed fine for him.

One- & Two-Bedrooms With An Additional Bathroom Most one-bedroom DVC villas have one bathroom. Some have a master bathroom with a separate jetted tub, tiled shower, sink and toilet in one room. Others feature a split bathroom with a shower/sink in one room and a tub/sink in another, but with only one toilet.

There are two resorts that feature a full second bathroom in one-bedroom villas! These resorts are:

That also means that the two-bedroom villas at these resorts have THREE full bathrooms.

This can come in handy in many situations. For example, my family stayed in a two-bedroom villa at Kidani Village with another family with two teenage sons. We took the master bedroom (with the gorgeous bathroom shown above), I’ve always thought that Grand Villas were out of reach for us due to the huge number of points required. For example,  a three-bedroom Grand Villa at The Grand Floridian ranges from 112 – 227 points per night!

However, I have found two villa types that offer three bedrooms at a point level that many owners could swing.

The first is the three-bedroom Grand Villa at Old Key West. These villas sleep up to twelve guests and have one king bed, two queen beds, two full beds, and a pull-out sleeper sofa.

The OKW Grand Villas start at 47 points per night during Adventure Season, which breaks down to less than 4 points per guest per night. If you were looking for a place for multiple families to stay together, this 2,375 square foot villa would offer plenty of room and privacy for everyone. Keep in mind it books quickly since it is such a great value with points!

The other value three-bedrooms are the Saratoga Springs Treehouse Villas. While they only sleep up to nine, they do provide three separate bedrooms: two with a queen bed and one with bunk beds.

There’s also a sleeper sofa and chair in the living room. I like that they give more privacy than a two-bedroom at a similar point level (they begin at 39 points in Adventure Season).

I hope this post gave you some ideas of villas that give the best bang for your buck (in points, of course). If you want help finding availability at these resorts and making your DVC rental reservation, get in touch with David’s DVC Rental here and they will help you with everything!

Any questions? Leave a comment below or join the discussion in The Budget Mouse free private Facebook group!

Cannot wait to try this on one of my upcoming trips! AK Lodge is too priority, probably followed by Riviera.