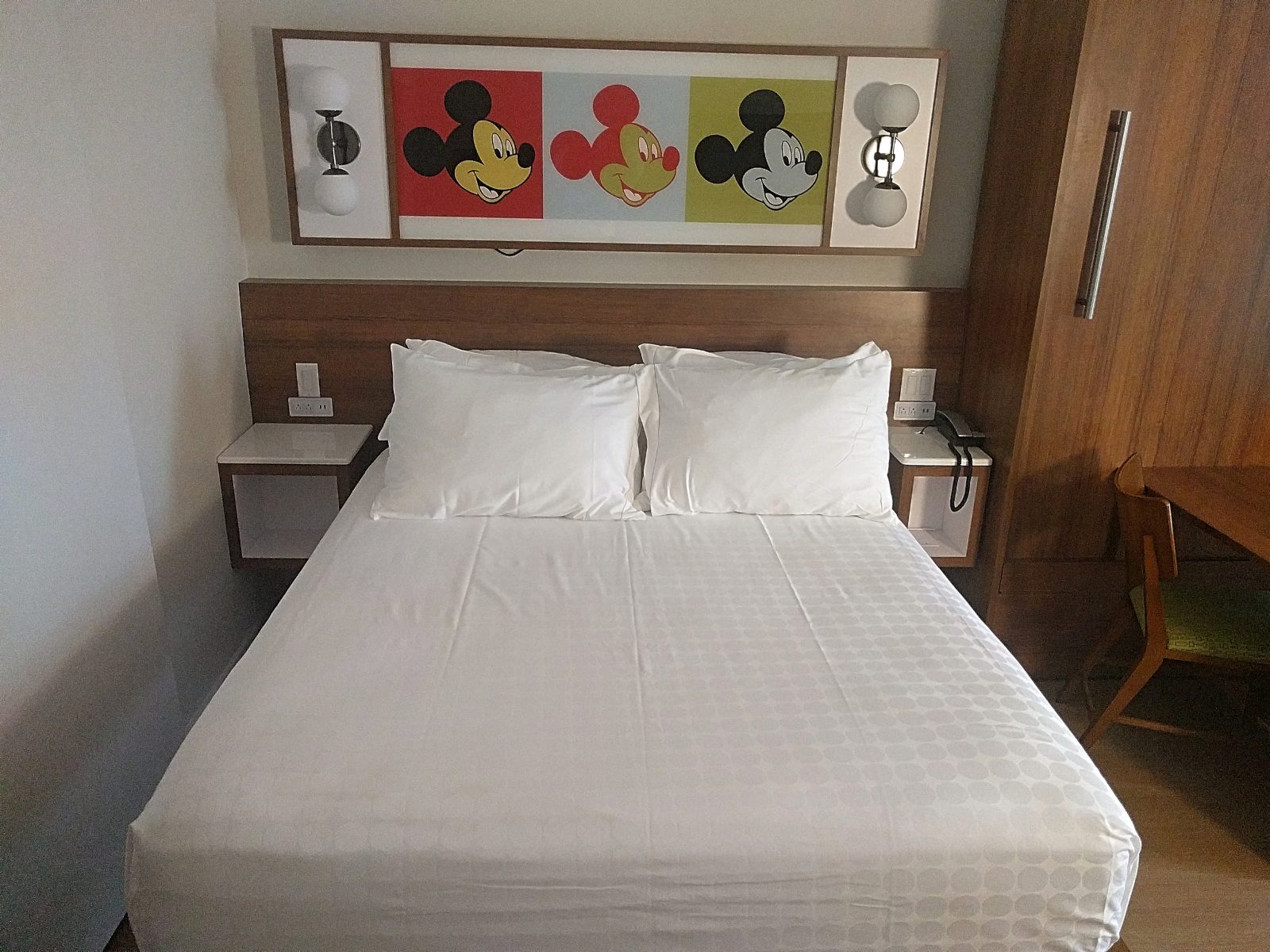 I’m excited to share a bunch of pictures of the new Pop Century refurbished rooms with you today!

Pop Century is my favorite value resort (and one of my favorite resorts at Disney period) and rooms there received a major overhaul recently.

As you can see, the rooms are barely recognizable!

The look of the renovated rooms has been receiving mixed reviews so I am curious to see what you think. My friends stayed in one of the new rooms recently and documented all of the details (big thanks to Laura and Kelly). 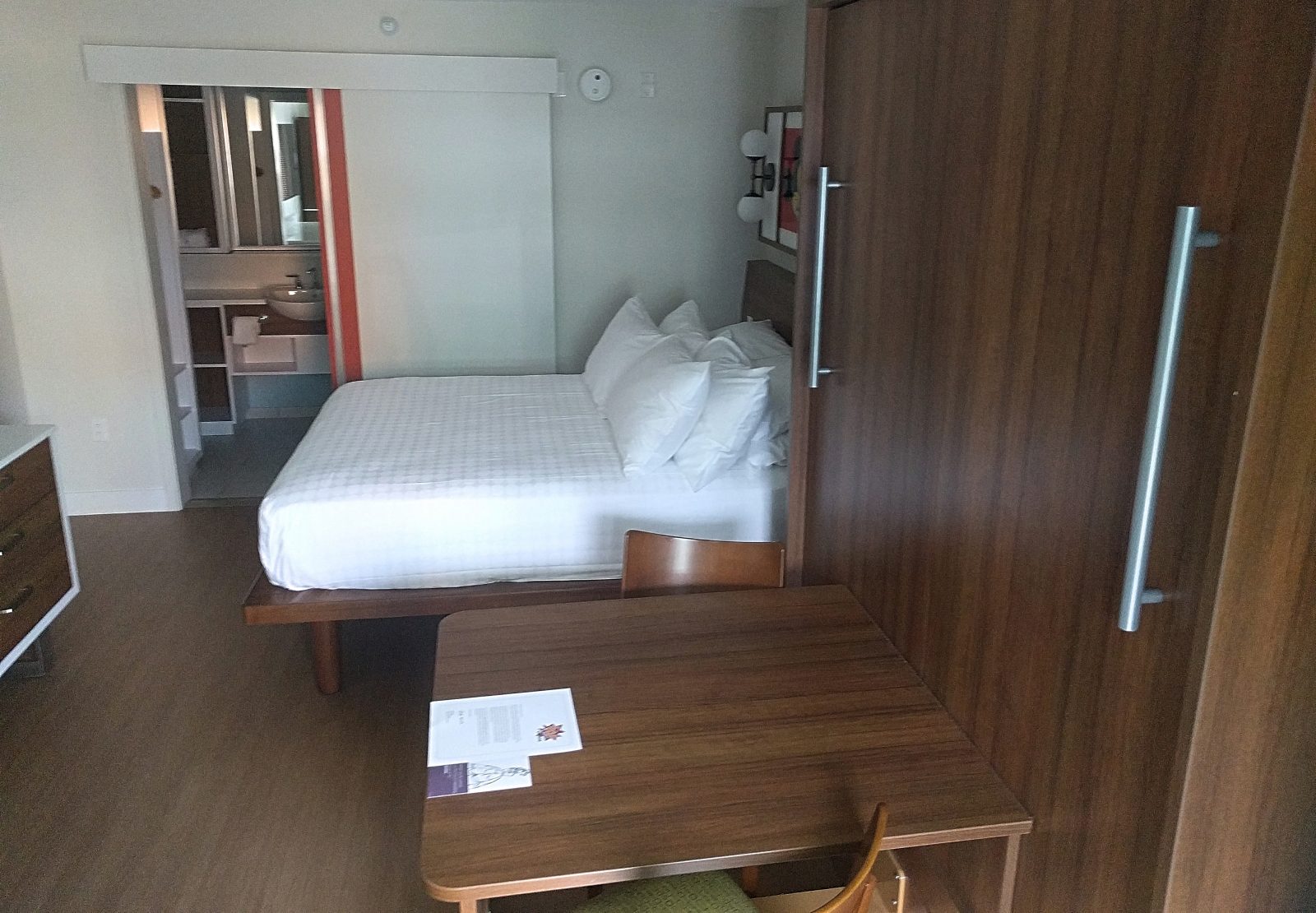 Yes, as of early 2018 the rooms are all now completely refurbished! The renovation was completed in 2017-2018.

There are so many changes to the rooms it’s hard to know where to start. The only thing that hasn’t changed is the size – the rooms are still about 260 square feet.

Instead of two full sized beds, the rooms now have two queen beds, one of which is housed in a pull-down “Murphy” bed unit.

The beds both have standard queen mattresses, so they should be equally comfortable (unlike Disney’s notoriously uncomfortable pull-out couches). 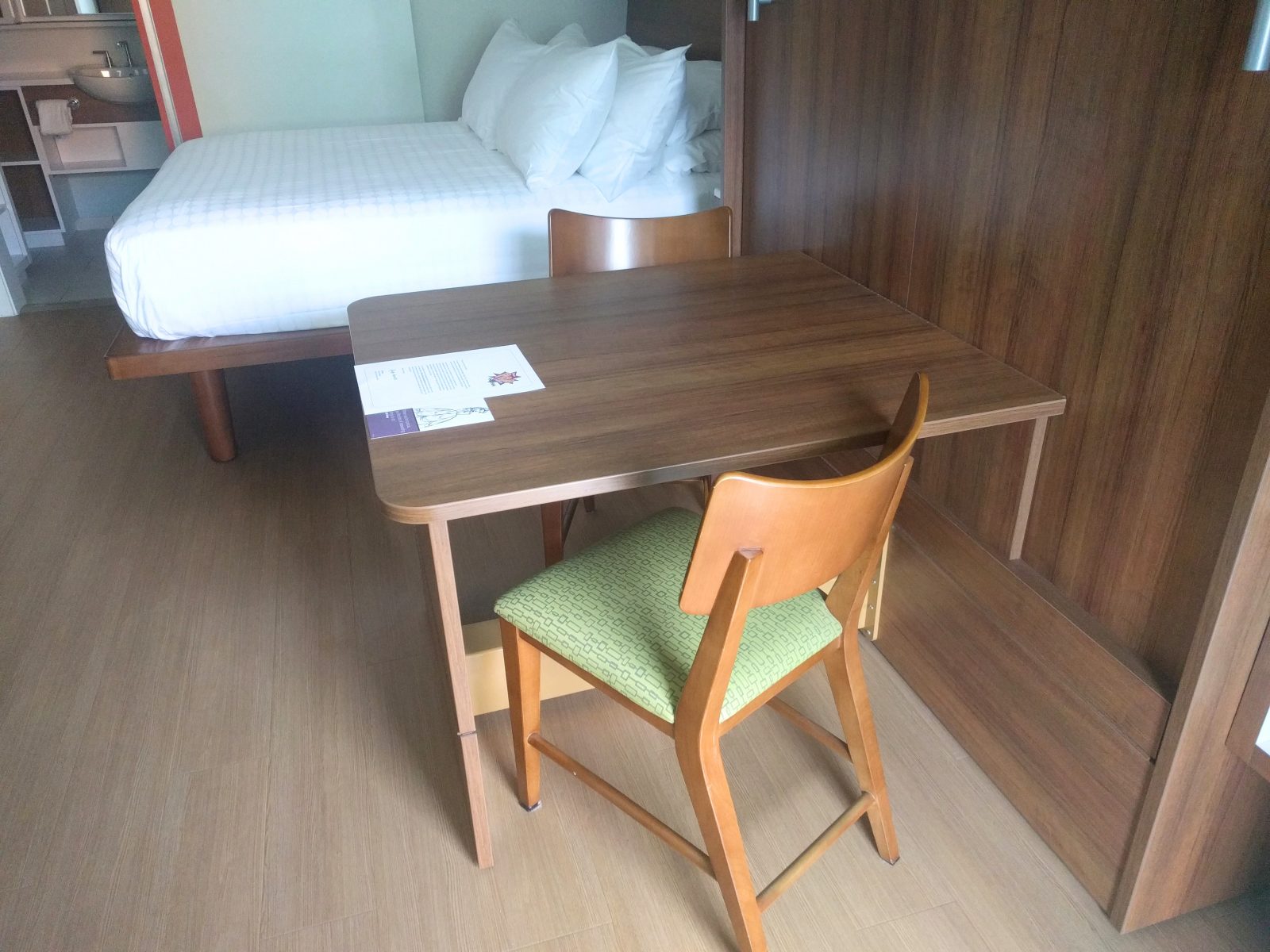 When the Murphy bed unit it up it makes space for a small table and two chairs. I love the flexibility this provides and the space it opens up since the table and chairs were previously taking up room along the wall. I also love the mid-century modern table and chairs which fit perfectly with the Pop Century theme.

The carpeted floors have been replaced by laminate which makes the rooms more allergy-friendly and easier to clean. 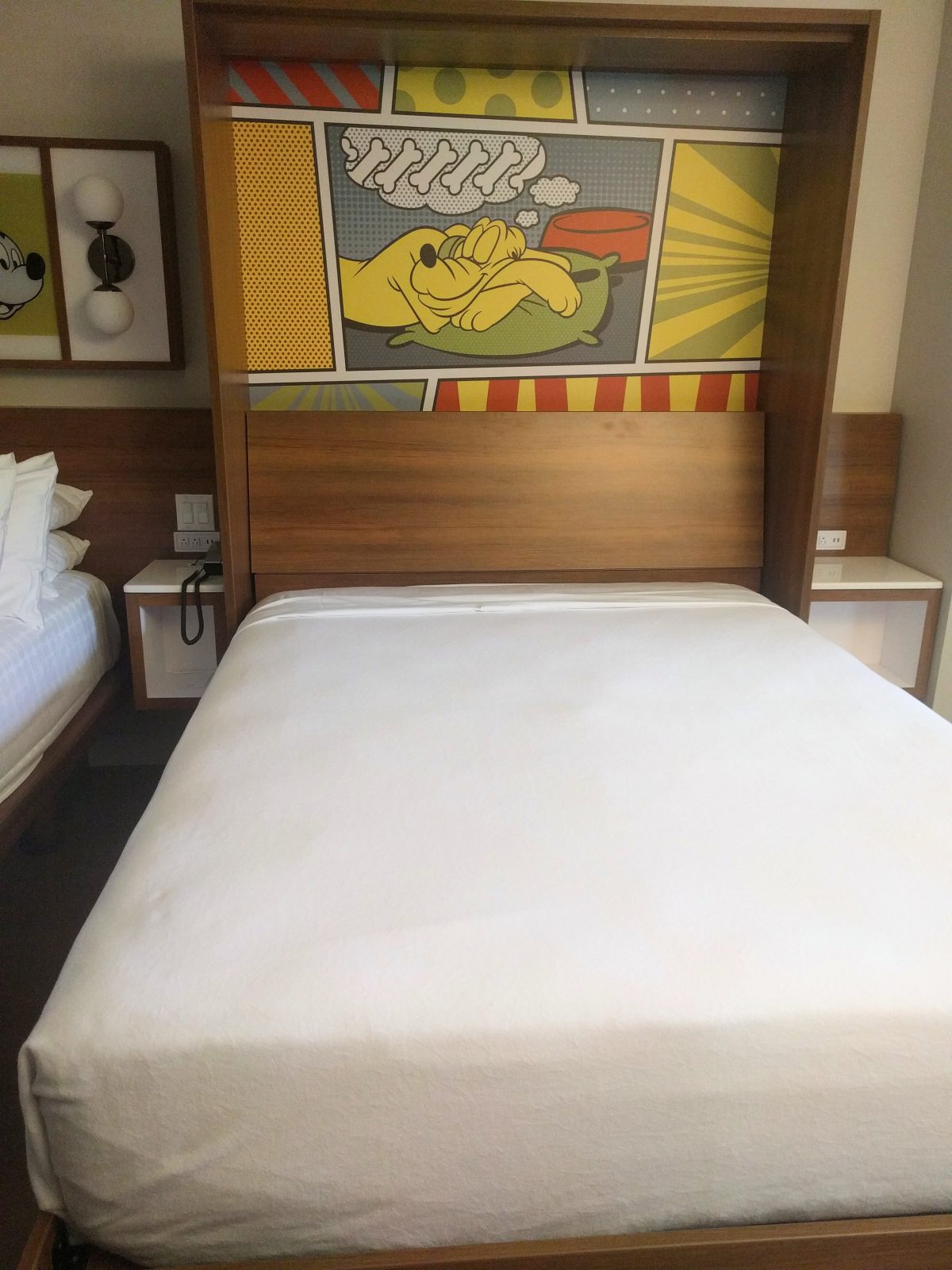 Here’s a look at the pop art-inspired Pluto inside the Murphy bed and the built-in bedside table units. 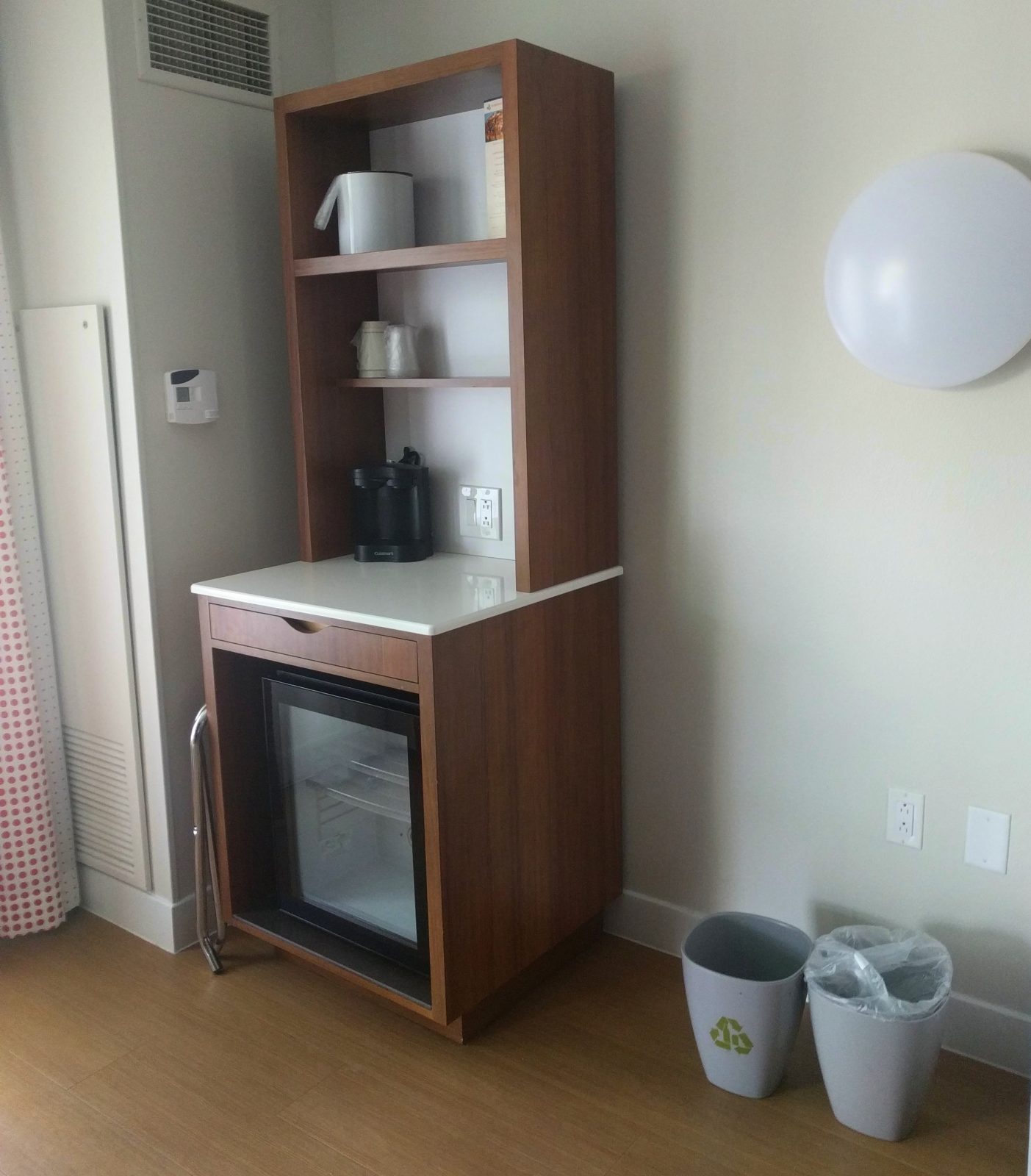 Another big upgrade is an in-room coffee maker… thank you Disney! 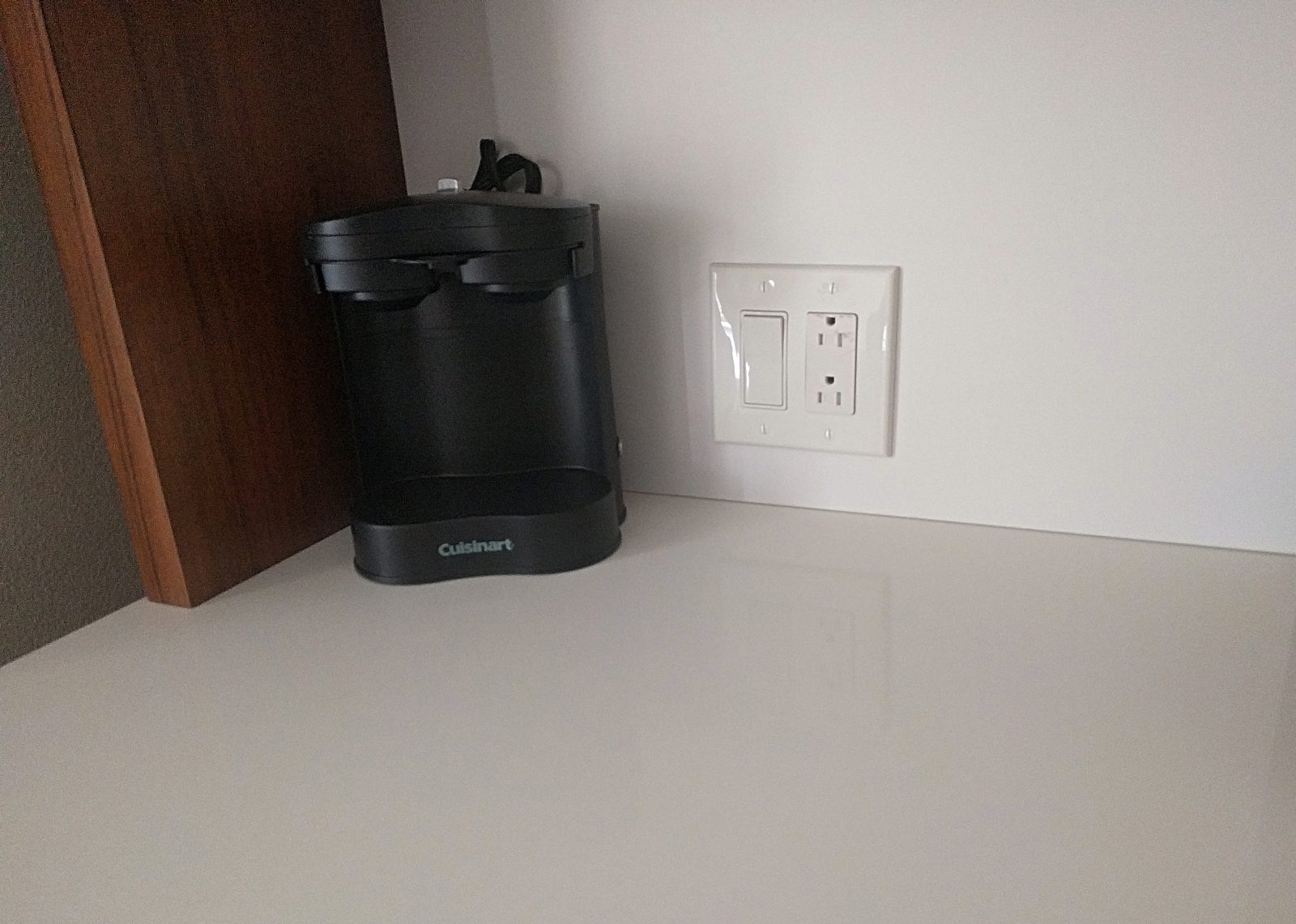 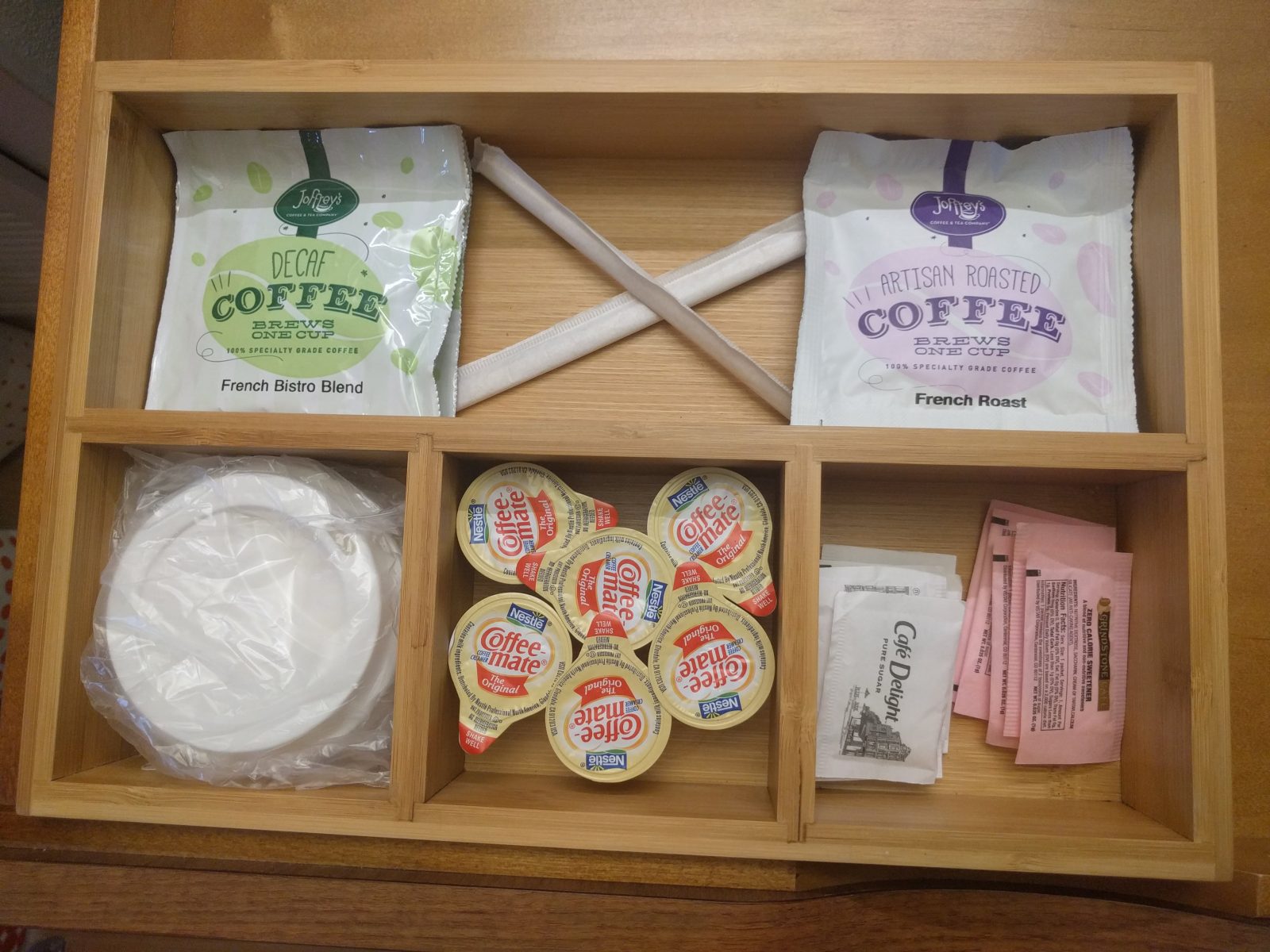 There are coffee pods and supplies in the drawer below the coffee maker. 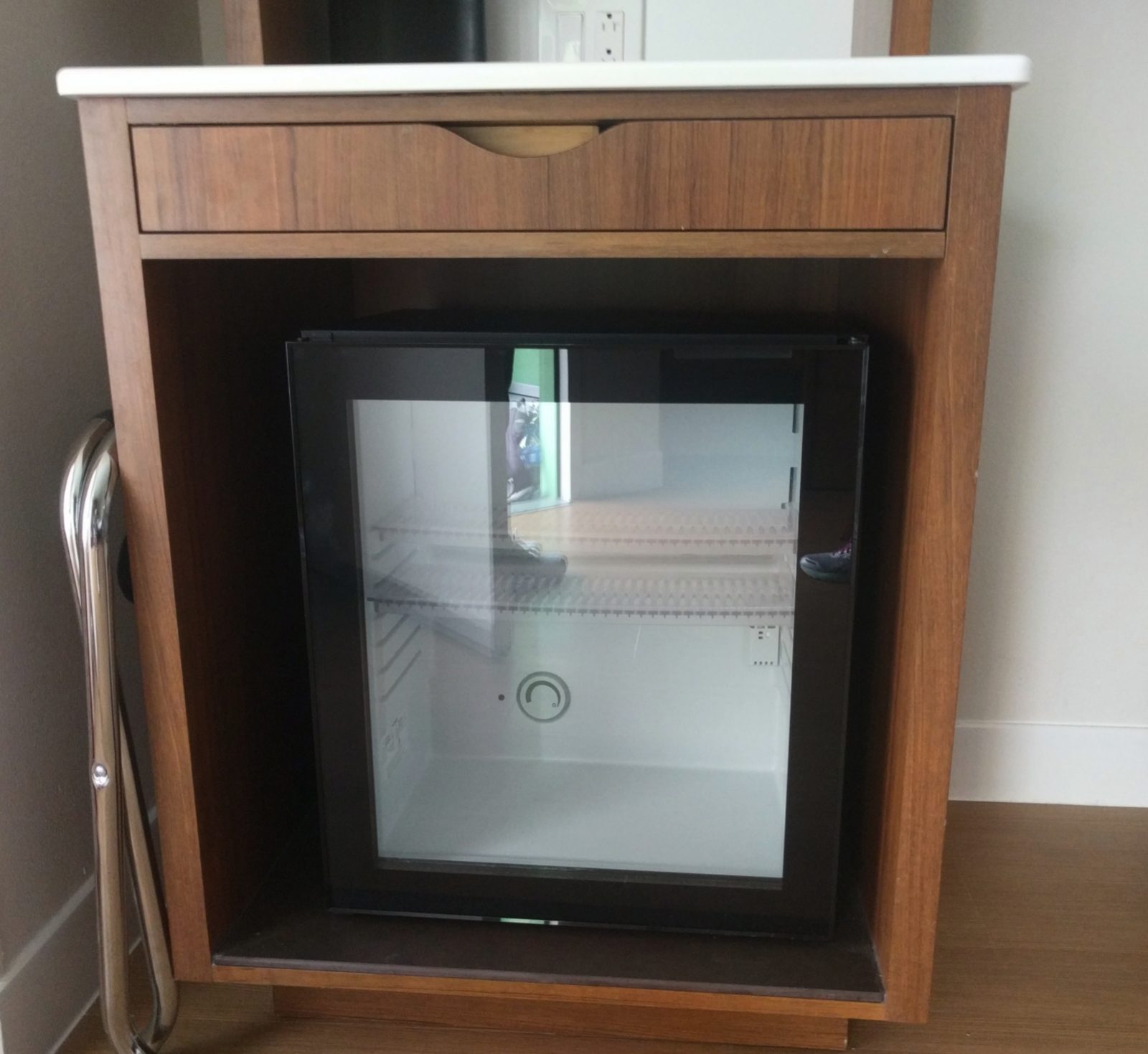 In the same wall unit is a fancy new mini-fridge with a glass door. Will this prevent me from forgetting that I put food into the fridge? Probably not but it’s a nice touch anyway. 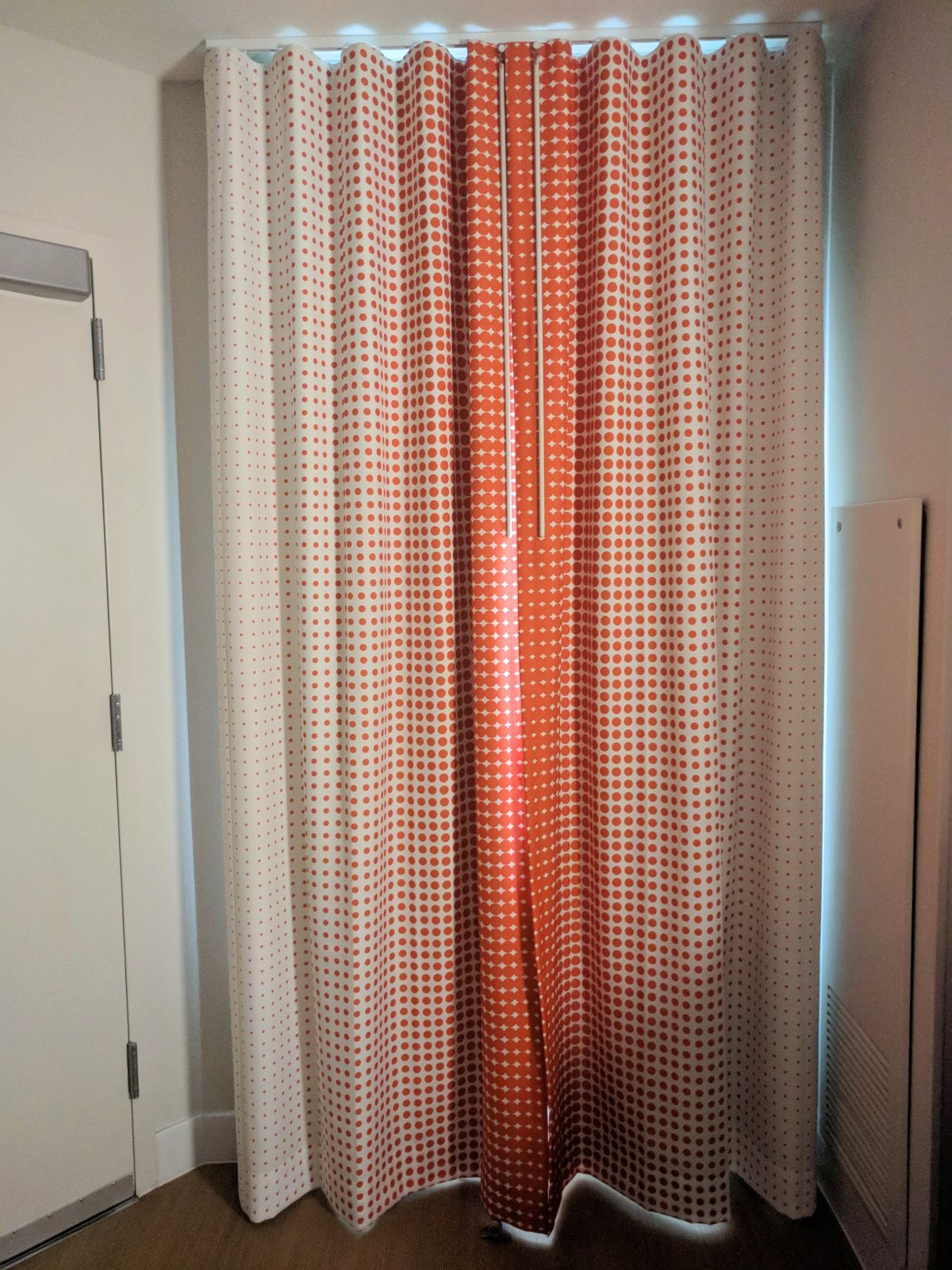 Here are the new curtains which look perfectly placed at Pop Century. This is the area where we usually park the stroller and it will still allow room for that in the new rooms. 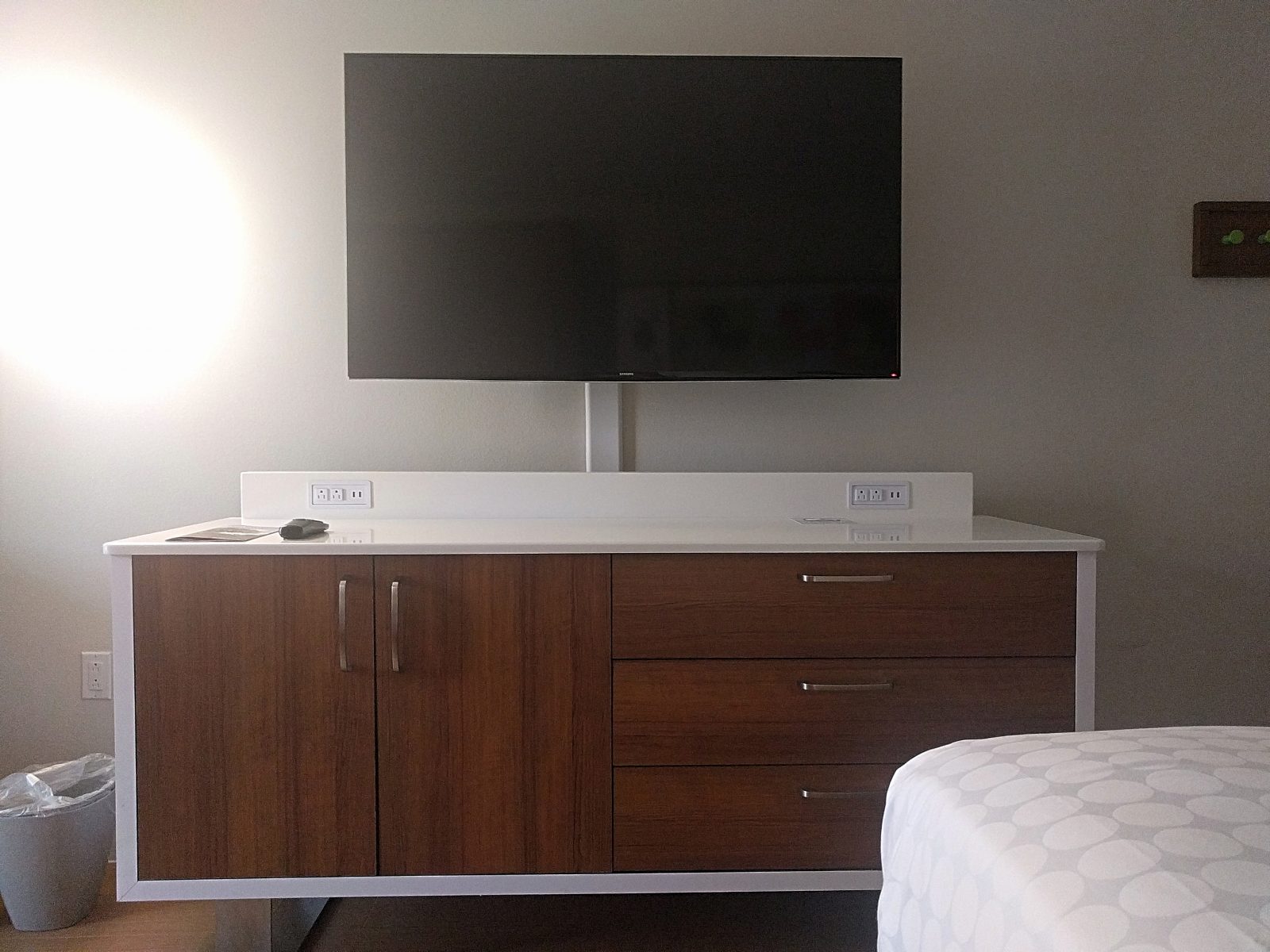 Next is a huge TV wall mounted over the new dresser unit. Everyone should be able to see “Must Do Disney” clearly now! 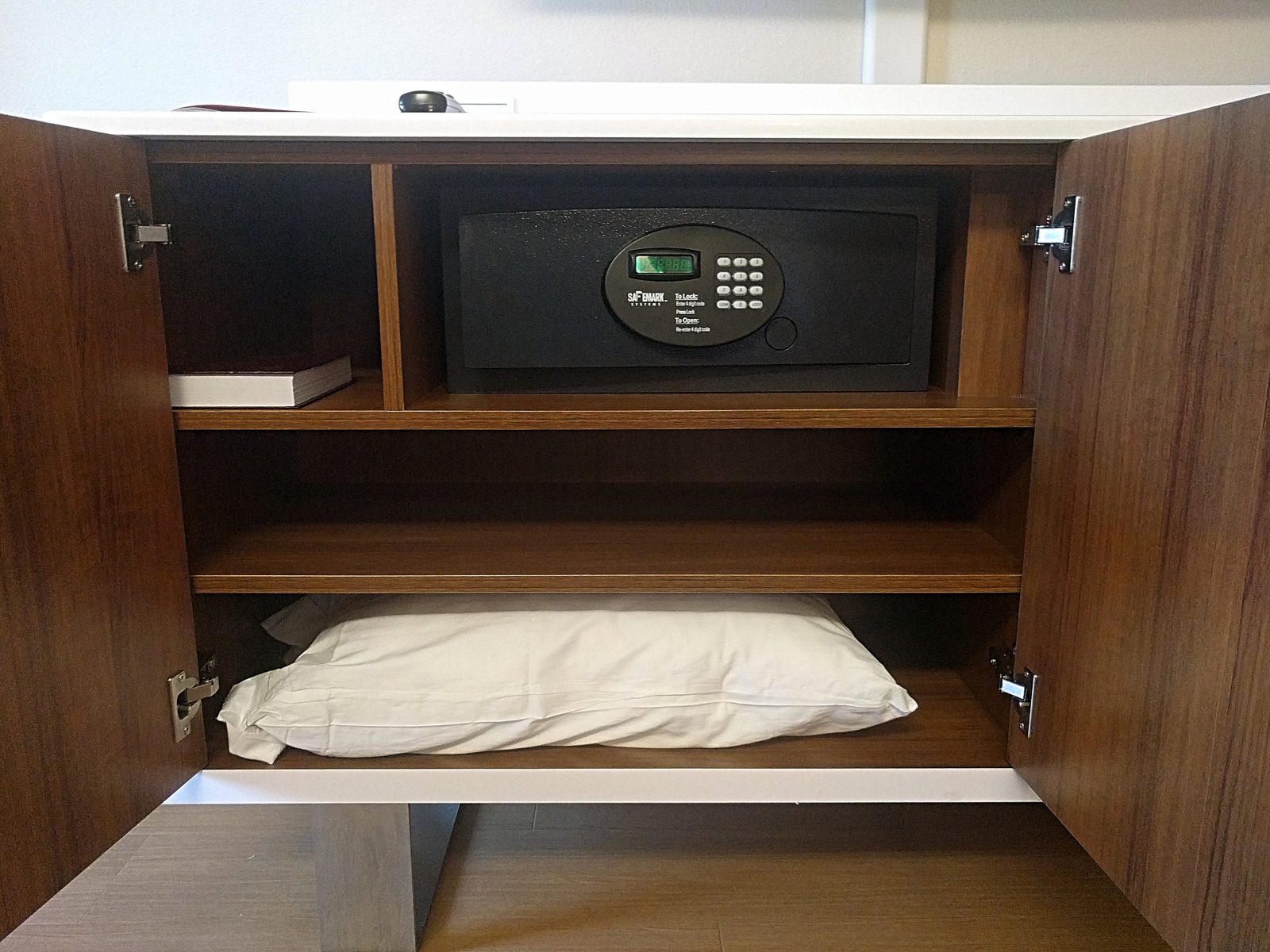 Inside this unit is the bedding for the Murphy bed and the in-room safe. It is now a programmable safe so no more keys, yay! 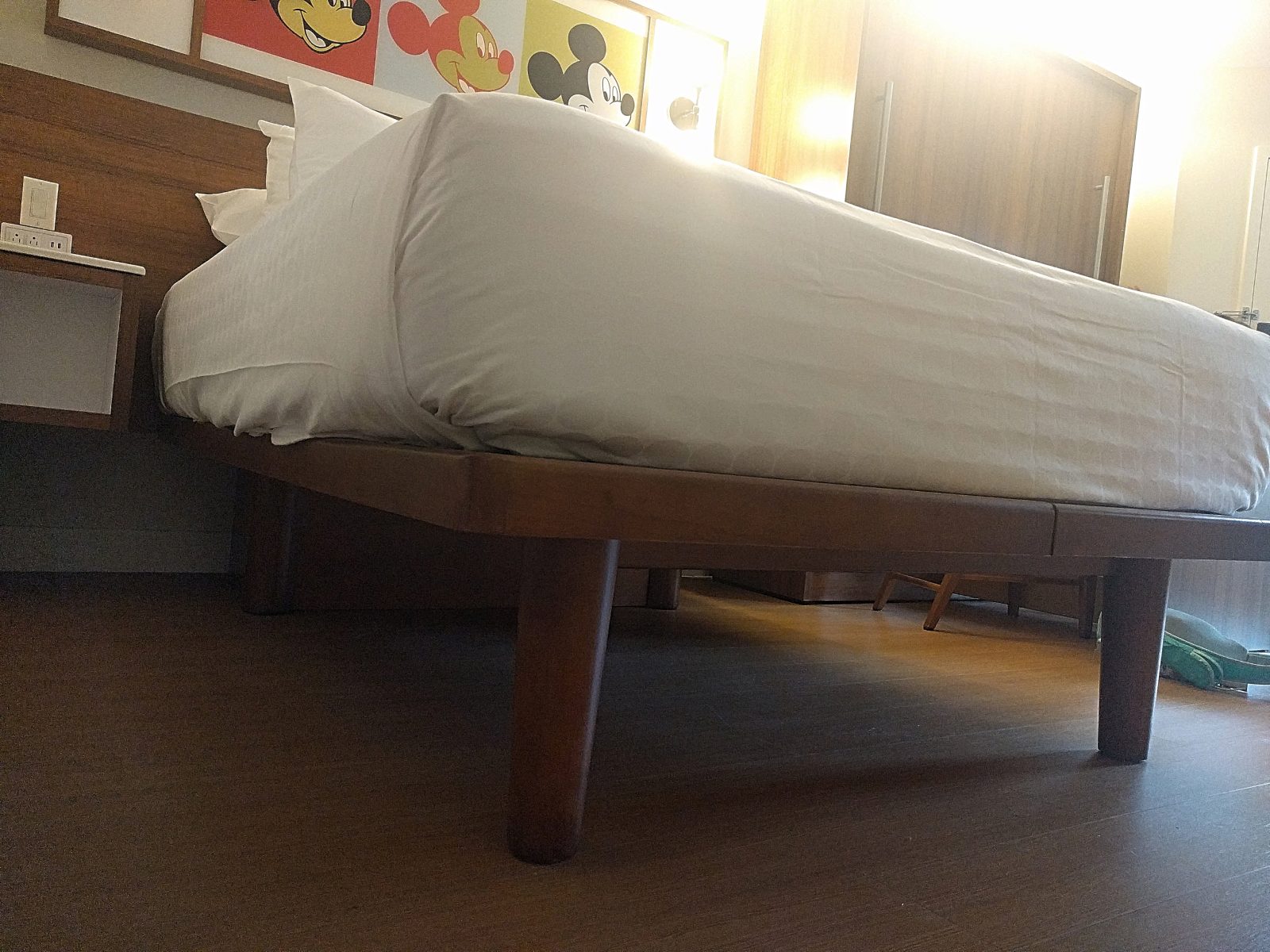 There is room under the bed to store bags which is another welcome addition. 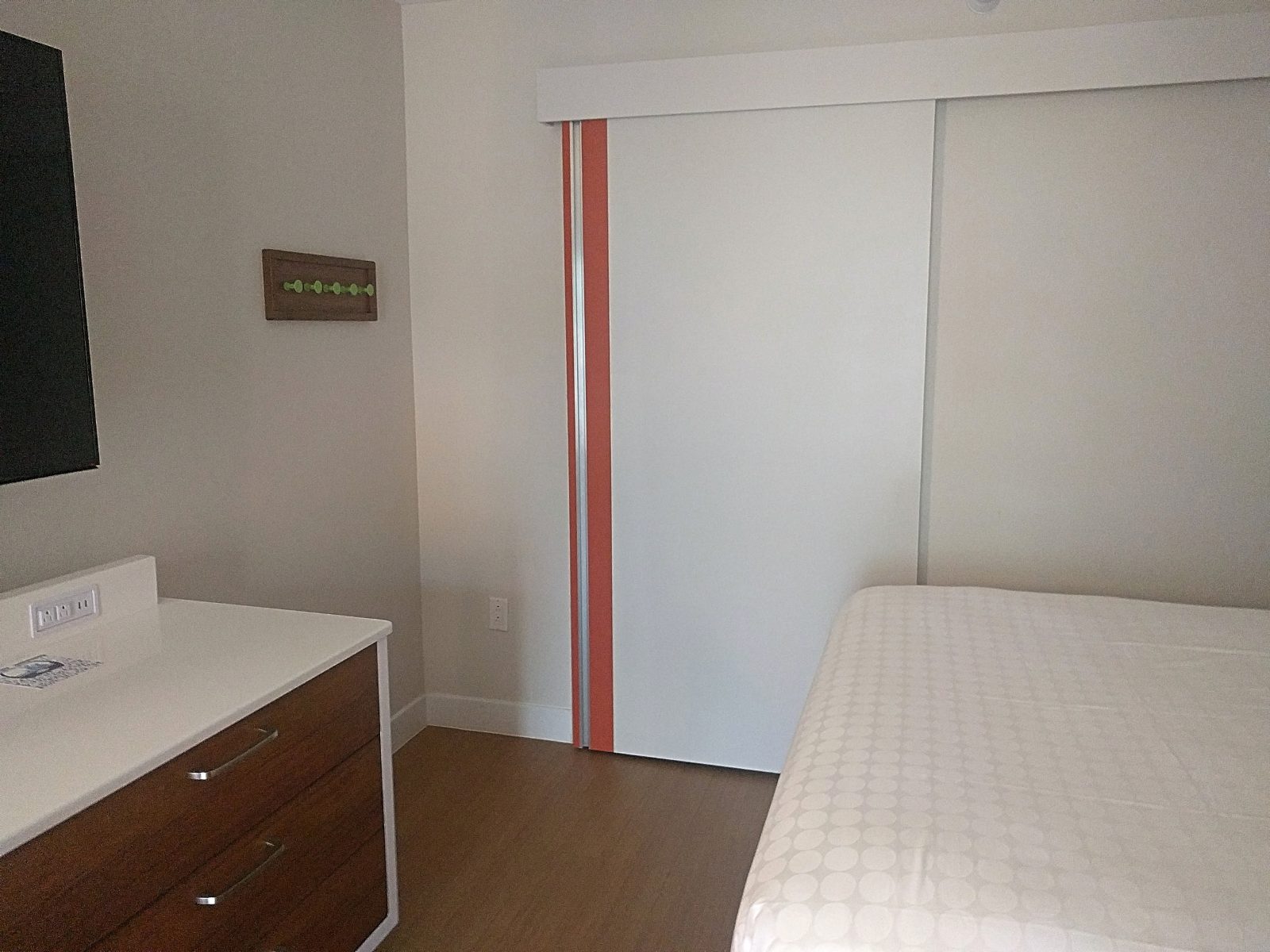 There are now sliding wooden doors to close off the bathroom area, much like those at Coronado Springs and Caribbean Beach. The door offers much more privacy than the curtains that separated the areas previously. There’s also plenty of room along the wall for a Pack N Play which you can request to be delivered to the room. 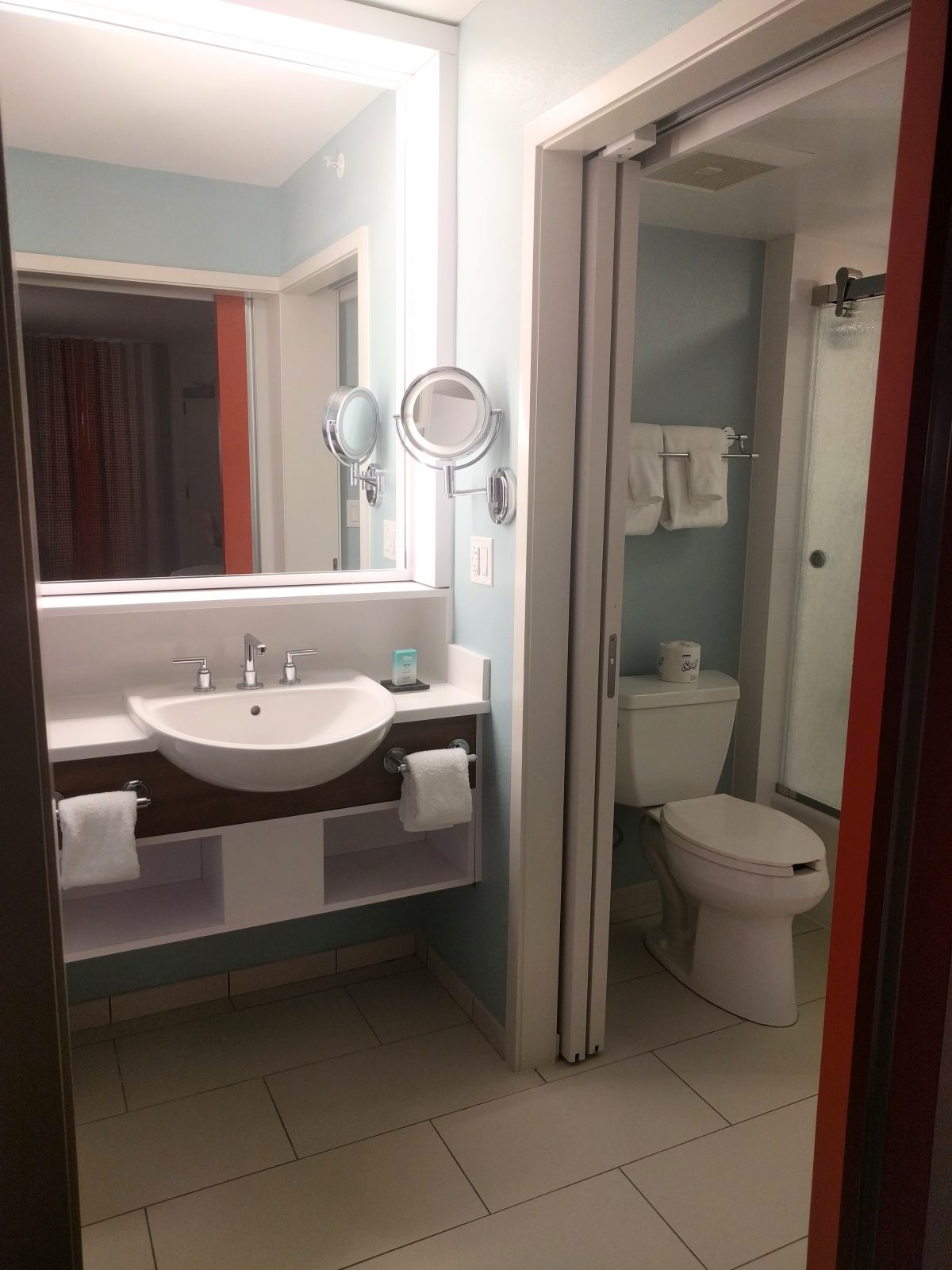 The bathroom is still a split setup with a hidden sliding door to close off the shower/toilet area. 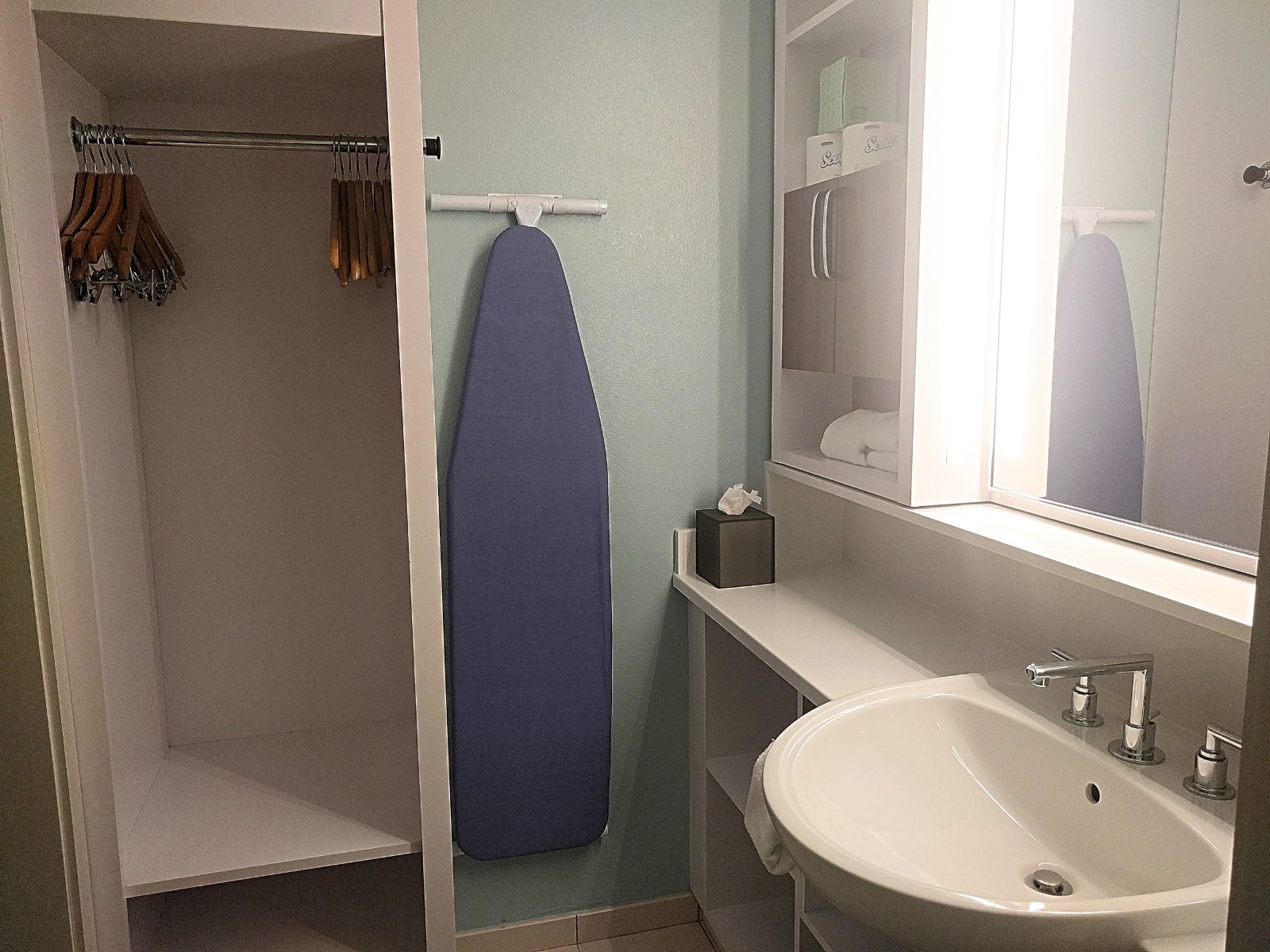 To the side of the sink is more storage in a small closet and plenty of shelf storage. A hairdryer and iron are stored inside the cabinet. 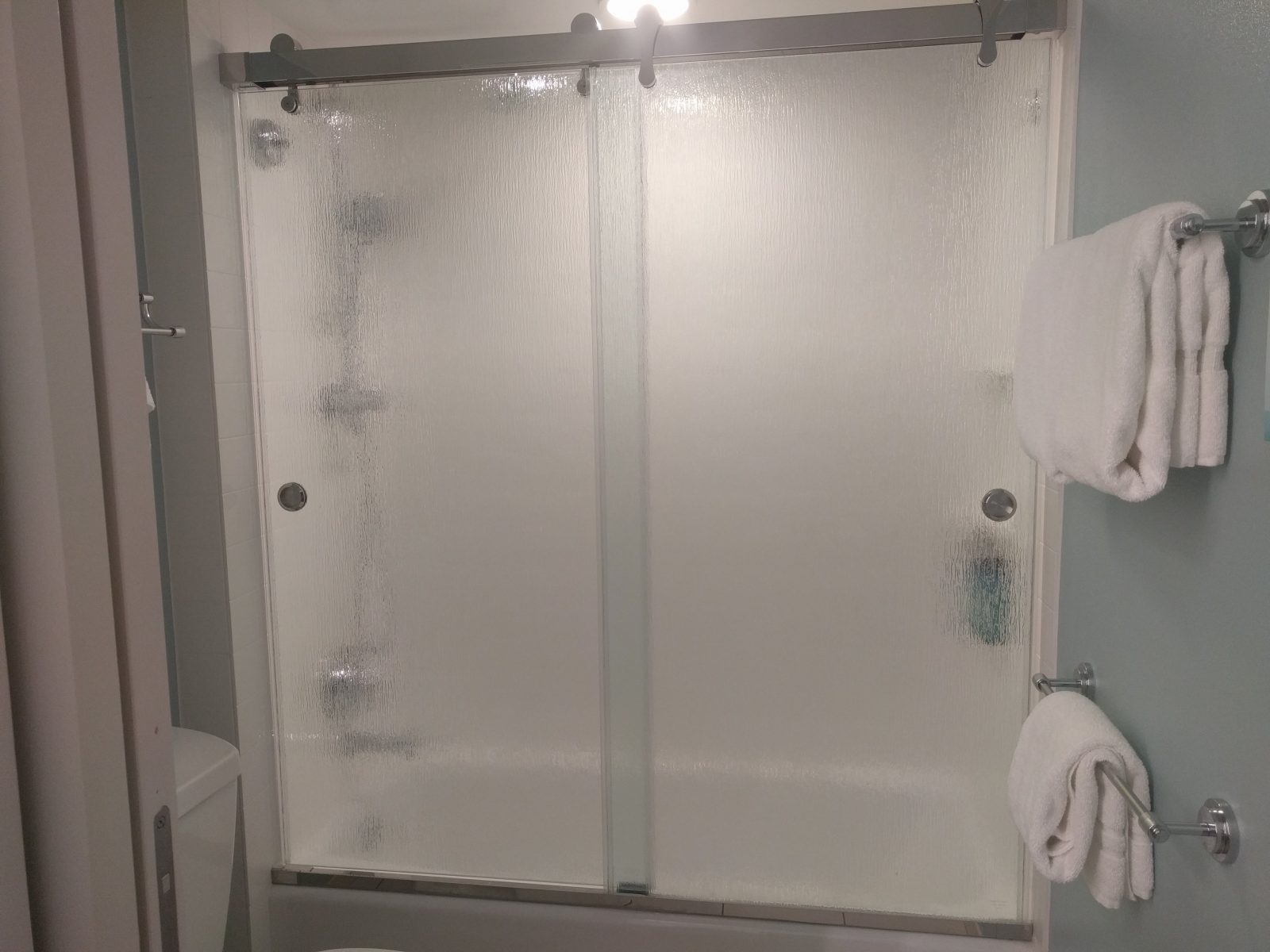 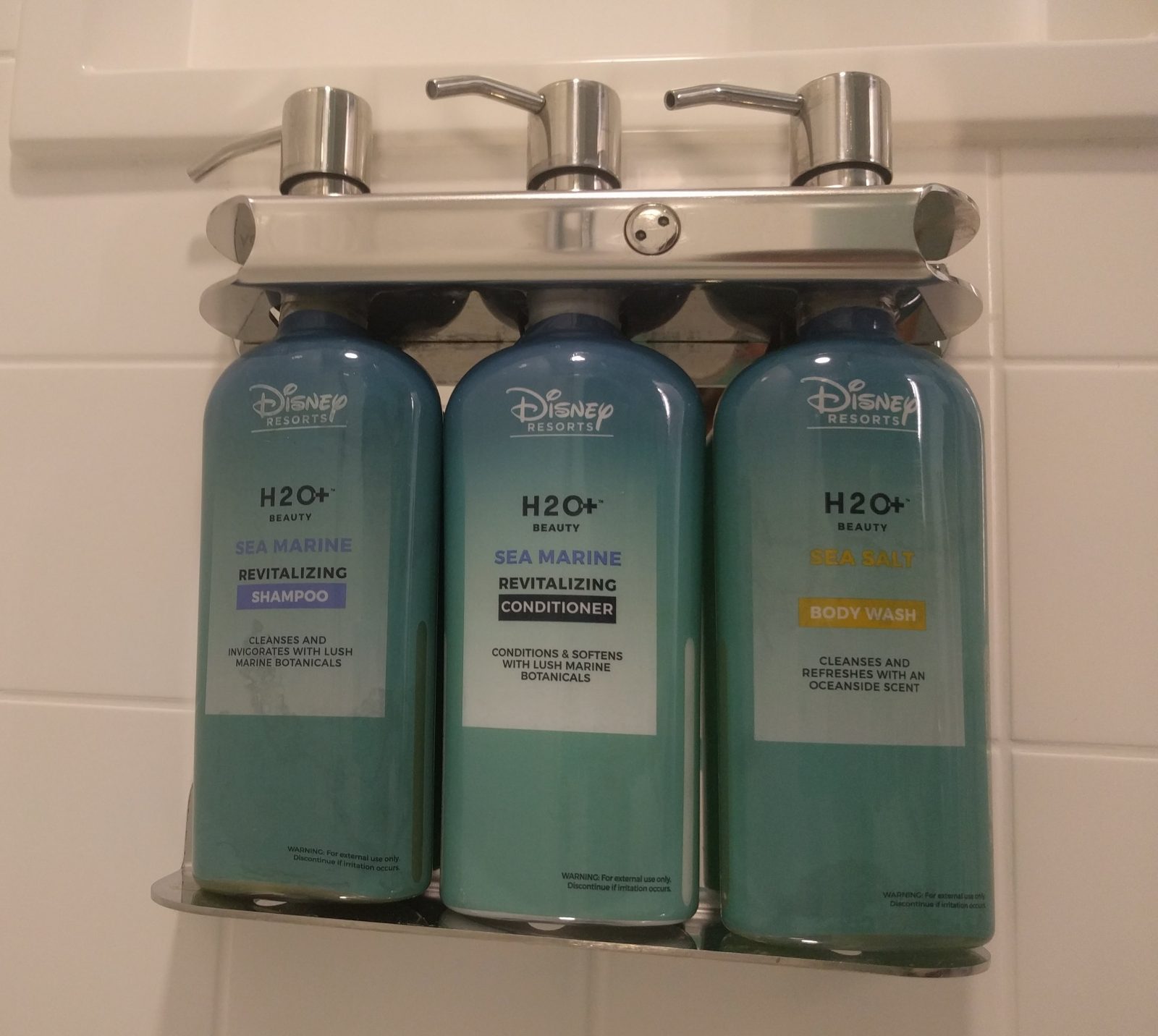 The shower curtain has been replaced by sliding glass doors and there’s wall mounted shampoo, conditioner, and body wash. Yes, this means no more little bottles to bring home. I appreciated the waste that will be saved by this setup since no more little bottles will go into the trash, though I’d bet this is a cost-saving approach more than anything. This shampoo is totally amazing, by the way. 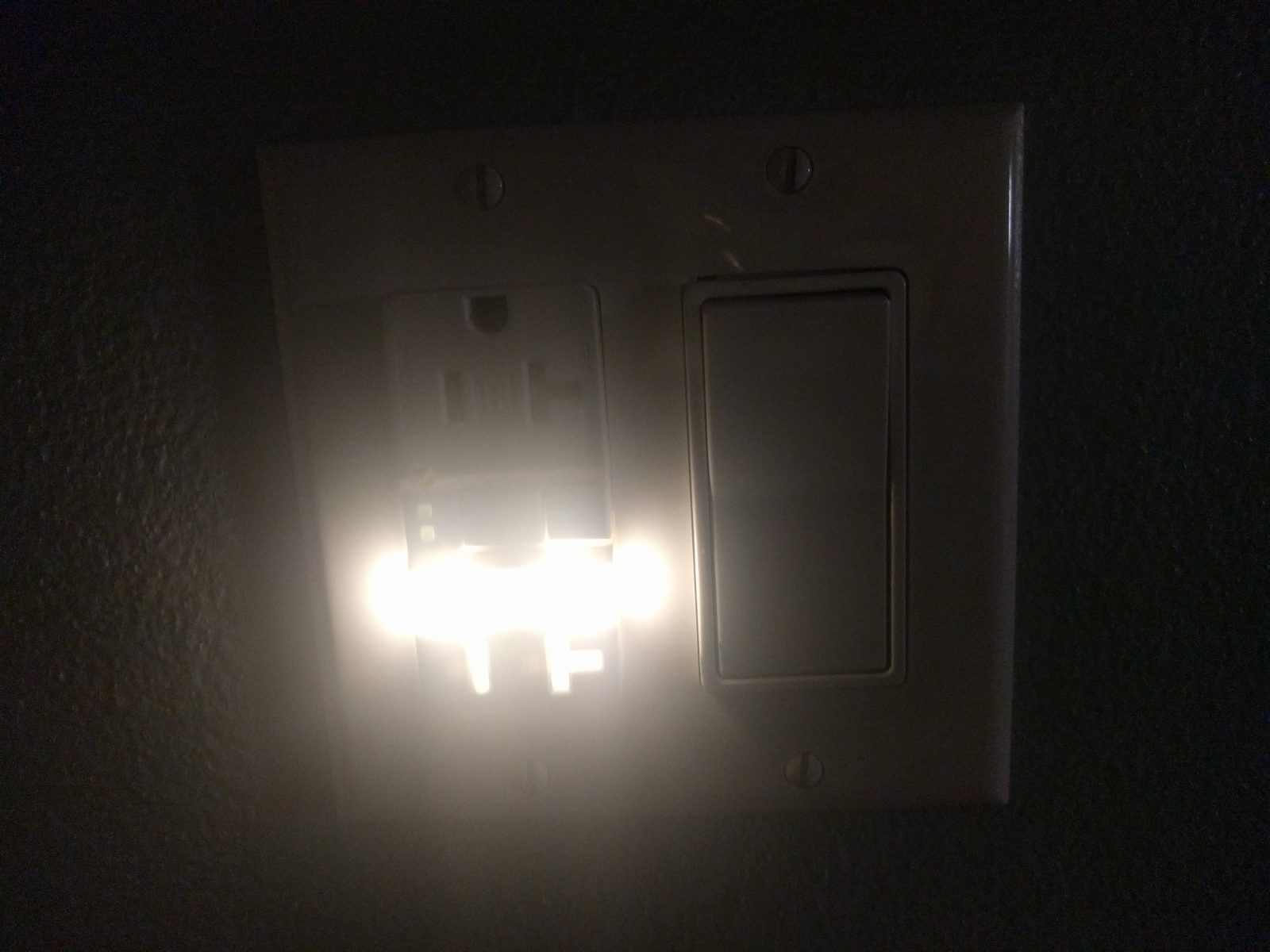 One more nice touch is the night light built-into the wall outlet. I always seem to forget to either bring a night light or leave it behind in the rooms, so I really appreciate this!

Overall, the room has a clean and mid-century modern look which I appreciate but others think looks too sterile for Disney. What do you think about the aesthetic of thePop Century refurbished rooms? Leave a comment below or join the discussion in The Budget Mouse Facebook group. You can check out my full review of Pop Century Resort here.

Clearly, the room was designed to be SUPER functional for those traveling as a family. I love all of the changes – queen beds, a coffee maker, wooden door for the bathroom area, etc. Rooms at all of the Value Resorts are slated to be remodeled in this style in the coming years, and I can’t wait to stay in one of the new rooms! 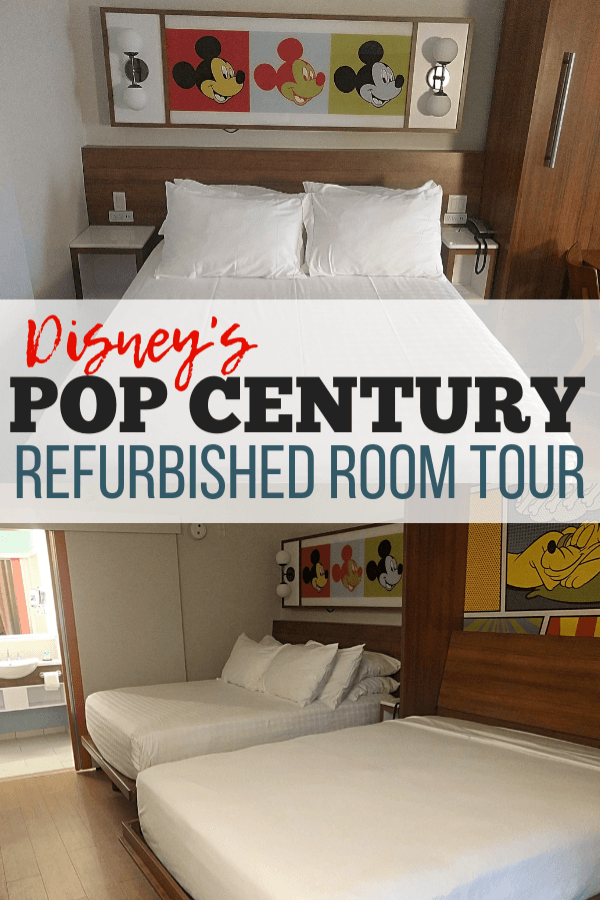 I agree with you, Marc! I really like the shower door in particular. I'm afraid I can't help you at all with where they source their materials.

Just got back from the PoP Century and my room was very clean. The mattress were the best I slept in. Even better than mine at home loll Same for the Pillow, very soft. You dont want to get up in the morning :)

Hi, where do you suggest to stay, 50s, 60s 70s80 s??? lake view or landscape? they asked this question during the reservation process.....Any suggestions?

Hi Ana! If I have a standard room I prefer the 80's because it is close to the bus transportation and main building for the food court. If I have a preferred room then I like the 50's. You can make selections when you check in online but for the best room locations make a request. Here are the details: https://www.thefrugalsouth.com/the-best-way-to-make-a-room-request-at-disney-world-free-printable/

Fabulous photos! I’m going in 2020 and now I can really see the upgrades. Stayed there many times in the past but really looking forward to the new rooms. Coffee maker, sliding doors, a proper room safe, night light... WOW!

It is really a huge improvement, isn't it!?

Thanks for the review. Were planning a visit (from Finland) in Feb 2021 and decided we would be staying here as our 10 year old loves the oversized figures and the theming in general. Another thing that is a must for us (and looking at all pics, this resort seems to be the only one to have it), is the shower type. Our son is autistic and cant do any kind of those American type of showers with only a shower head in the wall, he needs a European style shower (as they have now installed at Pop), and to be honest, I prefer those too. lol As he loves Cars, we thought of the Cars suits first (but bed arrangement doesnt really suit us and again...the shower head lol) so this will be perfect to also pop by into AOA and check out the Cars outside. I love the look of the new rooms. They seem functional with a touch of Scandinavian minimalism and remind me somewhat of most rooms at Disneyland Paris hotels, some Disney touches but just enough not to be in your face.